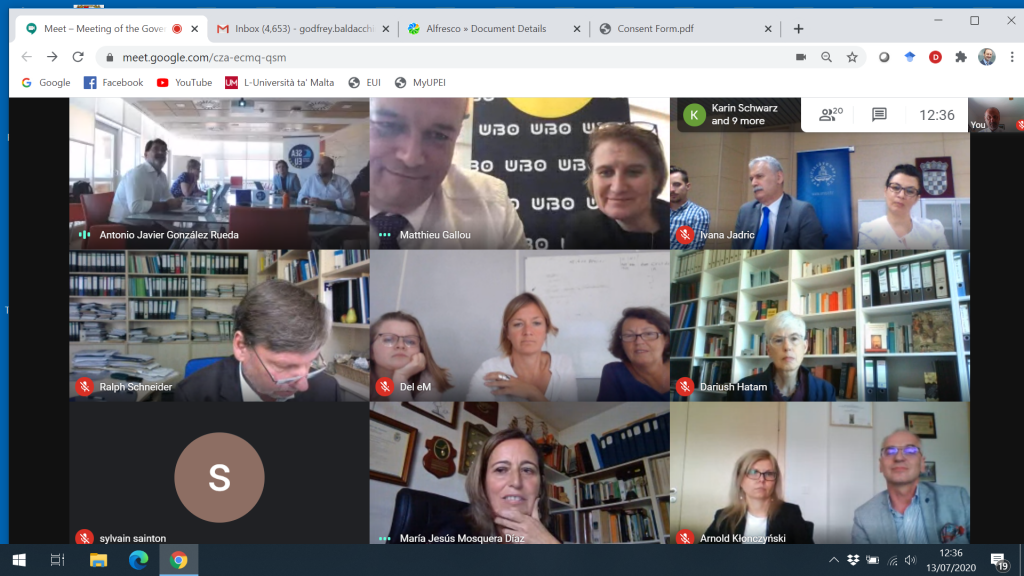 Held by videoconference, it was attended by rectors, vice-rectors and students of the SEA-EU alliance and representatives of the European Commission

On the last 13th of July the first Governing Board of the European University of the Seas (SEA-EU) took place virtually as a preventive measure in this de-escalation situation after the confinement due to the coronavirus pandemic. The Governing Board represents the highest institutional body of SEA-EU, and it is formed by the rectors of the 6 participating universities (Universities of Cádiz, Western Brittany, Kiel, Gdańsk, Split and Malta), as well as 6 vice-rectors , 6 students from the alliance and the SEA-EU general coordinator. This Governing Boards was scheduled to be held physically in Brest (France), with the University of Western Brittany as host, and its President Matthieu Gallou as chair, who also performed this role in the virtual adaptation of the meeting.

The session began, after some welcoming words, with a presentation of the alliance by the SEA-EU General Coordinator, José A. Muñoz-Cueto, who briefly explained the structure and representation, as well as the composition of the Governing Board. In the second item on the agenda, the leaders of the different work packages presented the main advances made in the first 9 months of the project, the activities planned for the near future, as well as the main challenges and barriers encountered, especially in the scenario caused by the COVID-19 pandemic. The project proposals that the alliance has jointly developed in the SwafS H2020 (reSEArch-EU project) and Erasmus KA203 calls for Strategic Associations in the field of Higher Education (SEA-EU-DOC project) were also presented. In the third point of the agenda, the Quality Manual, the Ethics Manual and the Brand Manual of the alliance were presented and approved by the SEA-EU Governing Board. The session continued with a round table in which the 6 Universities presented how each of the member countries has integrated this initiative of European Universities in their Higher Education and Research policies.

Vanessa Debiais-Sainton, head of the Higher Education Unit of the General Directorate of Education and Culture (GD EAC) of the European Commission, and visible head of the European Universities Initiative, participated in the Governing Board of SEA-EU giving the conference entitled “European Universities Initiative: Current and future perspectives”. In it, she explained the vision that the European Commission has on this emblematic pilot project, encouraging partners to get fully involved to achieve the ambitious objectives proposed, allowing the optimal execution of the project and its renewal after the evaluation process. In this conference she also presented an analysis on the consequences of COVID-19 in the implementation and development of European Universities.

Next, a Manifesto prepared by the rectors of the SEA-EU Universities was presented, in which they reaffirmed the commitment of their institutions to this strategic alliance, the intention to consolidate the SEA-EU marine-maritime profile and to extend teaching collaborations and researchers in other thematic disciplines, the need to involve students as the main actors in the alliance, the firm commitment to digital transformation, the reinforcement of virtual teaching and mobility, and multilingualism, as well as their demand before administrations local, regional, national and European of the need for political, regulatory and economic support to guarantee the success of this ambitious initiative. At this point, the students of the alliance took the floor and presented their vision confirming their willingness to actively participate in SEA-EU to achieve a greater scope of the proposed objectives.

After a review of future actions planned in the short term, the Director of Educational Internationalization of SEA-EU, Laura Howard, presented the main conclusions derived from the various interventions and discussions of the Governing Board, and the election of the date and venue of the next meeting of this institutional body of SEA-EU, which was set for December 14 and 15, with the University of Split acting as host.